The October Pony Sales began in Clifden on Thursday 23rd and they continued for five days this year until Monday 27th.  Sales business had been brisk in early 2008, following a period which saw some of the highest prices ever paid for a Connemara pony.  But the recent downturn in the economy has kicked in to the Pony Trade. Stallions, in foal mares and fillies are still selling fairly well but prices for colt foals and geldings are well down with some bids for them not reaching more than a few hundred Euro in the ring.   A Report on some of the figures for day one, Geldings and Riding Ponies, has come in from Grace and I will try to transfer most of it into the blog

Attached are photos of two ponies I pictured at the Clifden Sales yesterday(Thursday), a snippet of the action.

The first is lot 141 a 5yr old gelding x Templebready Fear Bui out of Coisdeel Dawn x Glencarrig Finn. Looking to be a show quality pony and already having a bit done (training shows etc) I believe he topped the sales at €5300.

The second is lot 178 a 5 yr old gelding by Golden Park Prince – Gath Greine. I thought he was a nice pony but disappointing for some at only 14hh. He made €3200.  Lot 190 was a 4yr old hunter type bay by Callowfeenish Mairtin – Hazy Lady. He had competed at training shows etc and having been fully clipped out he looked the part. He made €2800. One of the more interesting lots of the day was lot 155 a full brother to the champion Blackwood Fernando. By Ferdia out of Dancing Queen, this 10yr old, who had placings in Hoys qualifiers to his name, left the ring unsold at €4200.
The average type gelding was making the €2000-3000 and the better quality gelding fetched a bit more, between €4000-5000 but on a whole I thought vendors were not being rewarded for having their ponies broken and riding
Regards, Grace

Jim Mullaney from Moycullen received one of the better prices on Monday for his colt foal Lissroe Fionn, Lot 1038, by Monahganstown Prince out of his own mare Lissroe Lady.

He believes this well-grown bay with a white star will make a fine riding pony while his buyer, Niall Smith, who keeps 7 Connemara ponies at home in Carlow, and paid €1300 for his purchase,.

Filly foal prices were quite good for the prettier and well-bred fillies and bids quickly reached up to €2000 for some of these. A cream-dun filly foal, Lot 838 by Sweetwall Captain Courageous-Western Sparrow Lass,  was bid to €2,200 on Sunday, a bid turned down by her breeder, Larry Gohery from Tynagh, who hoped to get a better price later. The foal’s dam is an 11 yr. old dun by New Beginnings out of Grange Finn Sparrow and has show-jumped and hunted, so he has high hopes for the foal.

Fifteen year Sean P. Nee of Renvyle had received an offer of  €4000 for his dappled grey 4 yr. old mare, College Park Star, Lot 711, who is scanned in foal to Lecarrow King.  By Kilmore Diamond – Kenny Lodge Pearl, (a Murphy Rebel mare)   She is a quiet and good-natured 145cms. and he was happy to take her home if she didn’t make a better price

P.S.  I am gradually replacing the pictures which had disappeared from this weblog.  I hope I can get them to stay in place this time.  Back to the drawing board now.  Niamh

The Connemara Pony Sales were extremely busy for all five days. A team of auctioneers put close on 1300 lots swiftly through the ring from 10am each morning.   While quality was varied and the numbers of foals was well up on previous years, prices were definitely down and it was very much a buyers market now A large marquee accommodated the Sales this year, more spacious than the smaller circular mart ring next door, but lacking the access to high seating which made the old ring a perfect viewing venue. The stewards did an efficient job in getting the large numbers of ponies into and out of the sales ring, often manhandling or matching strength with the strong, unhaltered and sometimes reluctant foals. 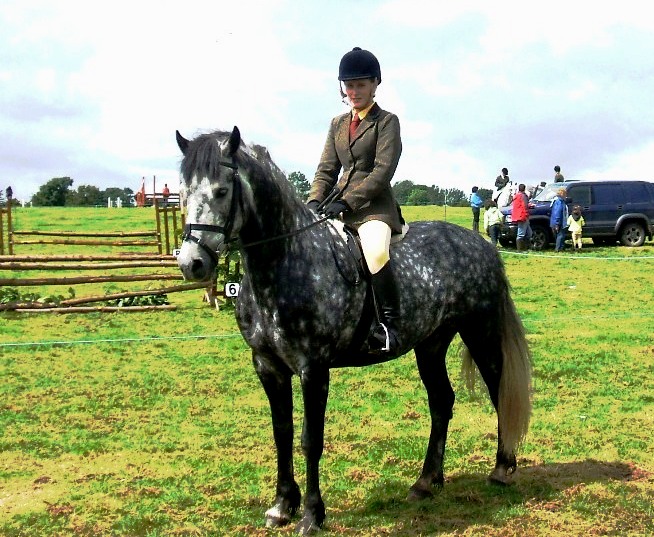 Here is a Connemara pony worth looking at, a striking 7 yr old dark-dappled grey gelding with a sterling performance record in the past two seasons.   He is by Westside Mirah out of Cruby Hill    He was bred by Seamus Keane of Ballinasloe and bought by Deborah McCann from John and Maeve Riordan of Lishmar Connemara Pony Stud, in 07.   He was backed by daughter Emily who says that ‘Hector has a fabulous temperament and loves attention’

In ‘07 he was placed 3rd in the Powers Quarry Performance Championship at Oughterard.  He won the Champion CPPA Overall Working Hunter Pony Award when his rider Emily also took the over

The pair have won over 80 rosettes in two years of competing.  Hector has also hunter trialled and competed in inter-schools show-jumping.  He was 2nd in the two dressage tests that he competed in.

He has been awarded many Championships in his two years on the circuit and his   most recent Championship win in Sept this year was All Ireland Ridden Connemara Gelding ’08 in Claremorris.  Deborah McCann contacted us to report on the sad demise of her outstanding young pony Mirah Hector (Westside Mirah X Cruby Hill) in late January.  Apparently having got out of his field, this much loved pony of daughter Emily, helped himself to the feed bins and in the space of a few hours during the family’s absence, he had died and left a huge gap in his owners lives.  They had had two very enjoyable and successful years together and he will be much missed.  See more on Mirah Hector in the October Post.