The Cloonisle and Cashel areas of West Connemara have long been a heartland of Connemara Pony breeding.

A small but very popular Show, with major Trophies sponsored for every Class, the Cashel Show of August 2nd attracted many entries in all classes from the surrounding area. The weather on the day was ‘nothing to write home about’ although not as dire as the weatherman had forecast, with intermittent rain and some dry spells. The picturesque Cashel ring is flanked on three sides by the sea so a quiet and dry day is always prayed for.!

Peter Molloy’s Dooneen Stephanie Rose (Hazy Match – Jennifer Rose) caught the eye of the judges in the 3 yr old filly class and was their choice for Junior Champion also.

Judges Michael Casey and Kenneth Kyne also liked  Peter Molloy’s  Dooneen Alice – a full sister to Dooneen  Stephanie Rose – awarding her the top prize in the 4 yr. old mare class plus the Supreme Championship at the end of the day.

The Class for 5 to 9 year old mare with foal was won by Caroline Lydon of Carraroe with her dun mare of substance, Dancing Maggie (Corcullen Silver Belle X Bláthín)  Maggie’s  colt foal with the inspired name of Shakespeare is by Streamstown Mickey.           Grange Ruby Surf, frequently in the ribbons, (Grange Bobbing Sparrow X Kilkerrin Surf ) took the equivalent class for mares without foal for owner Padraig Heanue.

The Class for mares 10 years and over was awarded to Jane Andrew’s prolific winner Coral Misty Jane by Cloonisle Cashel X Coral Misty)    [A driving rain shower made for poor photo opportunities at this stage but cleared shortly afterwards.]   It was  last year’s winner of the Mare class over 20 yrs.  that took the honours once again. This was Grace Murphy’s lovely Lakeside Lady (Abbeyleix Dolphin X Kit’s Bay).  This same owner’s Smokey Biscuit (Glencarrig Finn X Smokie Star) also took home the prize for best Gelding. 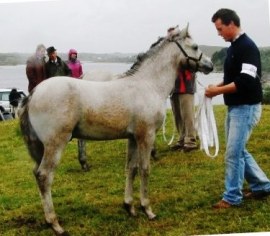 The photo here does not do him justice (blame the rain!) but Winning stallion Galloon Ceol (Murphy’s Oscar X Newtown Golden Rose) and owner James Naan drove happily back to Co.Fermanagh with worthwhile winnings, having won the Stallion Class and also the Reserve Championship.

The Supreme Champion was the 4 yr old Mare Class winner, Peter Molloy’s Dooneen Alice, cheered on by well-wishers plus three generations of the well-known breeders, the Molloy Family of Claddaghduff.

Ridden Classes.   Meanwhile on the more sheltered side of the hill, three Ridden Classes took place, for a small but well turned-out group of riders ably judged by Frank Creaven

This site uses Akismet to reduce spam. Learn how your comment data is processed.