CLIFDEN  2019 Thursday 15 August.
Not so long ago the third Thursday in August – as many of you will remember –  was the one and only day of Clifden Connemara Pony Show; a great change has recently come about as the Pony Festival now flows on through three week-days, with both ridden, jumping and in-hand classes running right through each day. Working Hunter competitions now run on both Wednesday and Friday, busy with day-long classes. This means that you  really must stay in the area for a couple of days to absorb the full experience  and you will – as a Connemara Pony fan – see and admire many of the best Connemara ponies on our planet.!
This year Niamh’s Weblog was unable to comply with this suggestion and our visit was limited to just a few hours on the Thursday, spent viewing some of the younger-ponies and the ridden classes in Ring 2. and taking a few photos.  See  in Read More. END_OF_DOCUMENT_TOKEN_TO_BE_REPLACED 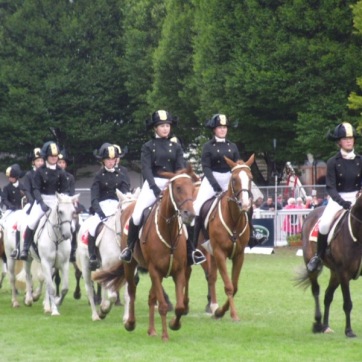 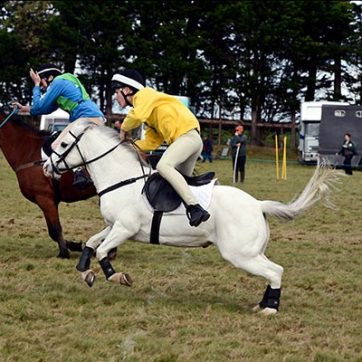 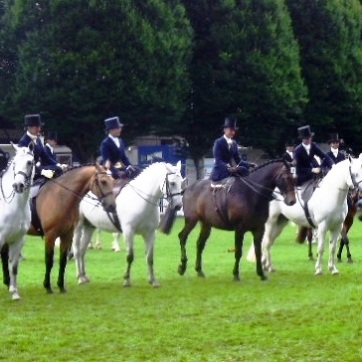 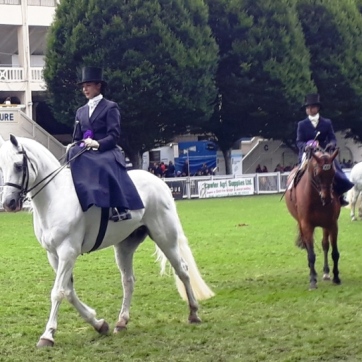 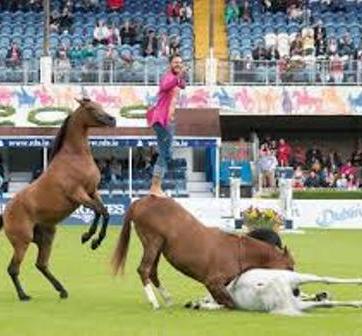 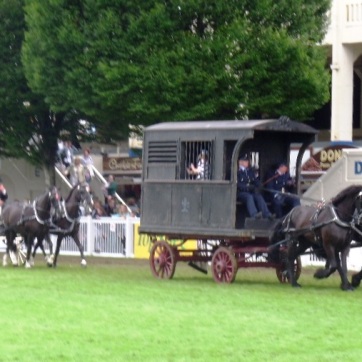 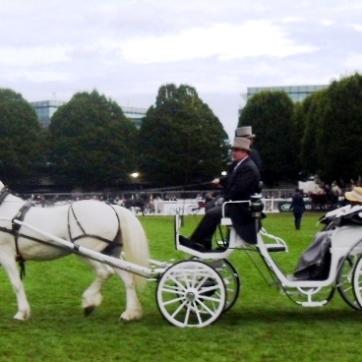 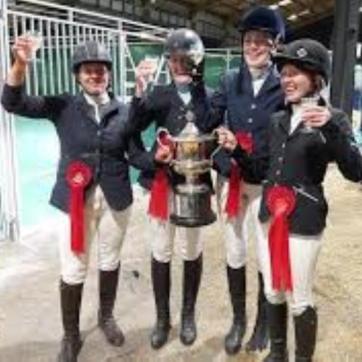 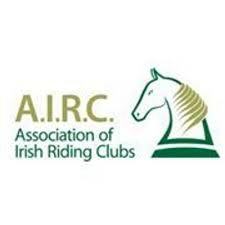 RDS Visit  2019.    Click on pic. to enlarge
The panoramic equine display of the Dublin Horse Show on the final day, Sunday 11 August, provided a feast of horse and pony viewing that can only be experienced at the RDS. Families were there in their thousands, the band lawn was packed to capacity and occasional free seats were like gold dust. The areas around Rings 1 and 2 were thronged evoking a day-out at the Galway Races. The Pony Club Games, fast and furious, with expert young riders vaulting on to their galloping ponies, was an exciting spectacle, while the sixteen young riders and ponies of Clare Pony Club branches, performed a musical ride in their smart Vienna Spanish Riding School coats and tricorn hats, providing a rare treat for spectators.
The side-saddle intermediate class was the epitome of female elegance on horseback, providing a glimpse back into a style of riding of an earlier age. The Connemara ponies involved stood out as ideal side-saddle mounts. END_OF_DOCUMENT_TOKEN_TO_BE_REPLACED

Just last week, while idly flicking TV channels, I came across something which made me sit up. It was the Hickstead Derby, now in it’s 59th year. And listen to this in case you haven’t  heard it by now,  Kildare’s young Michael Pender, at 19 years of age, was the only one to jump  two electrifying clear rounds to win this world-famous equestrian event. He was the youngest ever winner and it was his first time attempting the tricky and hazardous course.

The horse was the 12 year old Belgian Warmblood named Hearton Du Bois Halleux.  To see this combination take “a great lepp” off the towering Hickstead bank, land safely and within two short strides clear the next fence was an unforgettable sight
But this young man is no newcomer to the world of Show-jumping.

He has ridden ponies from an early age and jumped Connemara ponies for Ireland in many  pony International events, often showing-off the native pony’s all round athletic abilities.  In Millstreet in July 2014, at the European Pony Championships, we saw him jumping Doon Laddie – the 10 yr. old John Luskin bred gelding by Silver Shadow X Doon Kate, when they were 2nd in a competitive International event. The pair were Silver Medal winners as Team Ireland in the International Team Event also.

Back to Hickstead.  The Nations Cup was also won by Team Ireland and top Galway rider Michael Duffy, a key man in this team, also aged 19, was another Connemara pony veteran who had jumped internationally with both Silver Shadow and pic. Sillogue Darkie in 2010.
2019 was a great Hickstead year for Irish riders.  Pony pics. Niamh’s weblog.

The recent Irish Pony Society Show held by the Western Area committee was a really successful and well-organised event. The four judging rings were laid out in the vast sanded area of Claremorris Equestrian Centre and the weather was just right for the occasion. There were Classes for all ages and types of ponies from Starters to Intermediates and younger children especially were well catered for and there was no shortage of rosettes and sashes presented. Running sixty-six Classes and finishing by 5 o’clock was indeed a class-act itself by any standards .

Finally at day’s end there were eight Champions  lined up, all with a chance to take home the Supreme Championship of the Show.  Five Judges assessed the top ponies of the day and in consultation they selected the Show Hunter Champion, Carr Side Kate with rider Sadbh O’Connor as their Supreme Champion of the Show. Lelia Oakman with It’s Miller Time, took home the Reserve Supreme Sash.  Please  hover over page for Caption.
(writer is learning how to operate the new unimproved wordpress blog system. Niamh.)

Dear Reader;  A rather crucial problem has come up as regards posting pictures on Niamh’s Weblog. The disappearance of actual photos from this post on the Stallion Parade ’19, which has even spread like a virus to some previous posts, is the big problem.  I have redone most of the Stallion Parade slide-show with some different photos but unfortunately haven’t found others, including the ridden pics. 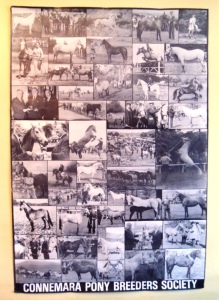 For some years now Niamh’s Weblog has been trying to ascertain the names of ponies and people in this  well-known poster put together by the late Secretary of the Breeders Society, Phil Mac Dermott in 1983, 36 long years ago.  Thanks to the many pony owners who helped with identifying these old photos, captions have now been added to a new large – size poster. which has been completed in collaboration with celebrated Connemara Pony writer Lib Petch.  Identification has not been 100% but over 95% are captioned.
I am happy to announce that a limited number of new these posters have now been produced by the Society for the benefit of members who wish to purchase this new Poster.

Many of you who have looked up pictures on Niamhs Weblog may have come across information on Phil’s  Poster commissioned by CPBS Secretary in 1983 , to commemorate 60 years of the Connemara Pony Breeders Society’s existence. You may even have a copy of this black and white poster of 36 years ago. If not you will see it on display in the Clifden Museum, thanks to author Pat Lyne who had the poster reprinted some years later. Like me you will have wished for captions to be added, identifying the ponies and people involved before everyone forgets. You will see in theright side of my Blog, if you scroll down. a page entitled “Photos, captions 1983 Poster”  Noted writer and Connemara Pony breeder Lib Petch has done a great job in identifying pictures and I too have got help from many people in Ireland and further afield so that most pictures can now have a caption.  A new Poster is therefore in order.


Oughterard Show, the last of the August Agricultural Shows in the Galway area, hit on a fine weather Sunday for their return as a fully fledged Agricultural Show this year after a one year lapse. Sheep, Cows, Dogs, Horses and Ponies and a well organised Home Produce display in the Community Hall, all made for a good old fashioned Show with interest and entertainment for all.There was not a whisper of rain all day from their early morning start at 8.30 to an early Horse and Pony Rings finish by 5pm and the ground stayed pristine all day, with the help of lots of sunshine. At the final curtain call, Judges Jane Somerville and French Connemara Pony breeder, Louis Marie Philibert had a very high quality of prizewinning ponies lined up in the Championship Class. Two progeny of Glencarrig Knight (Janus and Coosheen Breeze) emerged as the Judges’s favourites. Their choice of Champion was the Stallion Class winner, Jack Keaney’s 5 year old Murvey Rocco (Glencarrig Knight X Murvey Rita), led by Bernard Keaney. Their Reserve was Henry O’ Toole’s Castle Cloe (Glencarrig Knight X Castle Gypsy), an attractive young mare handled by Henry’s son Michael; earlier they  had been awarded the Red Rosette in the 4 year old Mare Class.   Niamh’s Weblog.